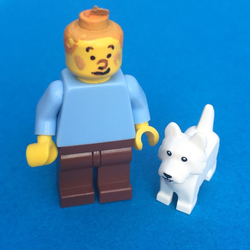 My proposal is a Lego series around Tintin, or Kuifje as we call him in the Netherlands. This as a first example: Tintin at Marlinspike Hall.

The Tintin albums have been around for a long time and many generations know the stories. A Lego series would be a nice tribute to this Hero and a new way for the younger generations to meet with him.

Many more models could follow. In one of the additional pictures you may see the shark 'submarine' from the 'secret of the unicorn'. And I'm working on a 'Tintin in Africa' model that I will post soon. Another obvious model could of course be the iconic rocket from 'Explorers on the moon'.

Creating Kuifje was a bit of a problem. But with some paint and glue I got to something with a reasonable resemblance. Haddock and Thomson and Thompson (Jansen en Jansen) were easier and I hope you recognize them, including professor Calculus, in some of the additional pictures.

I hope this idea gets the support that is needed so we can all enjoy the Tintin adventures in Lego soon!