Haku: The Dragon From Spirited Away 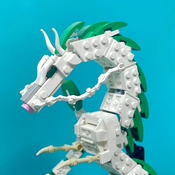 By CitrusBricks
37 comments
Haku’s Story and Build
From the world-famous animated film, Spirited Away, Haku is a character who accompanies the movie’s protagonist, Chihiro, after she and her parents wander into a strange world filled with ghosts and spirits. Haku sees the danger this world possesses to Chihiro and protects her with his life.
Haku has two forms: human and dragon. Seen in this build is his dragon form, floating above a rocky beach. Fans of the movie can see that through his bravery and compassion, Haku puts himself at risk to help Chihiro find her parents and escape the dangers of the unfamiliar world.
Spirited Away is directed by Hayao Miyazaki at Studio Ghibli. While other top-rated movies have been produced at Studio Ghibli, Haku still stands as one of the most iconic characters and loved by many fans across the world.
Haku represents courage to many, acting as a symbol of friendship and bravery. He is an inspiration to people of all ages, perfect for a LEGO model.