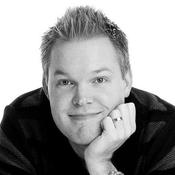 This is probably the biggest model I will ever build!
I do not usually build large models. For me as an AFOL, the challenge is to create small models. With as few pieces as possible and still maintain the recognition factor. You may have seen some of my models. The typewriter. The steam train. I usually build models that people recognize from everyday life.

So why did I build this chess game?
The idea from the beginning was not at all a chess board. It just happened one day, when I was sitting and playing with some pieces to find inspiration for a new small model. I ended up with something that looked like a bust shape and then put a white minifig head on top of it. The first chess piece was born. All by accident. But an idea was born. Make a chess game.

The chess pieces are based on the same construction design. However, there are details to distinguish them if you look closer. Yet, every piece is unique and has a consistent look across the board. The white pieces have softer and rounder shapes, while the black pieces have harder and edgier ones. White versus black. Evil and good. Ying and yang.

A good example is the queen. The queen on the white side has another type of hair that is more stylish and queen-like (at least in my opinion) while the dark queen has switches and more tightened hair.

It took me more than a year to finish all 32 pieces. Each with their own story. And I am working on a completely different set, but that is for later.

The chessboard was another challenge that had to grow while I was working with the chess pieces. The only thing I was sure from the beginning was that a gray color created a nice contrast to black and white. LEGO's name for light gray, medium stone gray, made me start thinking about the feeling of stone and weight (yes, the name of a color can trigger such associations with me). And so, I chose to create the feeling of masonry and cathedrals around the board. The pillars in the corners, together with figurines holding up the board, were inspired by ancient Greek and Roman architecture.

The void inside the board became a natural storage for the chess pieces with matching colors. The "gates" between the compartments hold the pieces in place and separated.

The project has taken around a year to complete and now I feel that it holds the right class for submitting it to LEGO ideas. A big thank you to Boris Vanrillaer, a fantastic photographer for the pictures and pushing me to get this submitted to LEGO Ideas.

Why would this be a good LEGO set?
The set appeals to both the LEGO enthusiasts and the classic chess lovers or grandparents that want to impress their grandchildren with an ancient game of chess. The set has a high level of authenticity and fits nicely on the coffee table or within the library. It will apply to those who like a good game of chess or appreciate an awesome LEGO build on the coffee table. If you do not want to play with it, it is still a nice detail in homes that attract curiosity. And for the true AFOL, you can make this chess piece easily your own.

I hope you appreciate my work and help me make this chess set a reality!