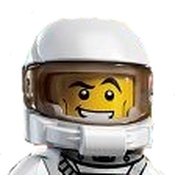 Inspired by 8480 Space Shuttle, I have created the Technic Lunar Module because I love the american lunar missions, and would like a model of the emblematic lunar module with both recreative and educative features.

In this model, the deployment of both landing gears and lunar rover are the same than the real american lunar module.

The landing gears deployment is performed automatically when released. The deployment of the lunar rover is manual, as well as the locking once deployed.

Ascending stage can be separated from the descending stage, and its center of mass is located above its nozzle, like the real lunar module.

The scale is 1/21th. It has been chosen based on the lunar rover, to make possible the folding of the rover into the lunar module.

The 12th of october this year, a movie based on the life of the first man on the moon will be released, and next summer, the 21th of july 2019, it will be the 50th anniversary of the first manned mission landing on the moon.
I think this is a quite good time to release a LEGO Technic Lunar Module.

I am still working on this model, to improve it as much as I can, so stay tuned for further developments.