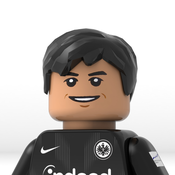 I live near Frankfurt, and lately I have discovered more and more the love for the LEGO architecture series.

So it was natural for me to build a Frankfurt skyline in the style of the architecture series.

Frankfurt, with it's many skyscrapers, is unique in Europe with it's skyline.

Every two weeks, I spend several hours in the LEGO store at the Pick a Brick wall.

During this time, I get to know how many of these foreign guests also visit the LEGO store.

I think, not only for these guests, it would be nice to take the architecture set "Frankfurt Skyline" as a souvenir home.

Frankfurt is located in the middle of Germany, in the heart of Europe!

I reconstructed the Frankfurt Skyline from a total of 600 bricks.

The following landmarks are represented:

The building looms like a pencil in the sky, and is the landmark of the fair.

The building was built in an environmentally friendly way, it has nine internal gardens

And is the architectural landmark of Frankfurt

Römer– The "Römer" has been the town hall of the city of Frankfurt am Main since the 15th century,

and is one of their landmarks.

Thank you for your interest, and if you like my work, please support this project!