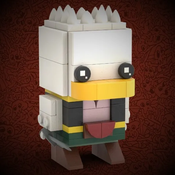 Hello Ghibli Nerds!
If you are reading this, you probably want more information about this project…
First of all, this build is based on the animation masterpiece "My neighbor Totoro", by Hayao Miyazaki, and it represents the Totoro family waiting at the bus stop.
More precisely, you have the Big Totoro, minifigure-sized in dark gray and white, holding its typical black umbrella. Its head can rotate, as well as its arms. He’s got two interchangeable kind of arms, in order to make him open them, or lay them along his body.
There is the blue Totoro, not exactly minifig-accurate, but doesn’t he look cute?
Instead of the Umbrella, he wears a large leaf over his head (I pick the idea from the 70 657 Ninjago City Docks set).
Finaly, there is the white Totoro, the smaller one, who also carries a leaf to to protect itself from the rain.
The model also features the street light on his wooden pole, and the bus stop board, using the printing from the 60134 fun in the park.
Originally, I built this on Lego Digital Designer as a present. Consequently, I had to use only existing pieces.
I then reworked it twice, and finally came out with this model.
For more details about the model ant its previous version, check the Flickr Album I made.
You can also check the video I made:
I'm quite happy with it, and I hope you do so!
If you don't, I'd like some advice on what could be enhanced. (well, even if you like it, your advice might be interesting)
Totoro's success is partly due to the popularity of the derivative products, such as the cuddly toy.
I think the iconic toy that is Lego should make it a real set to make his contribution.