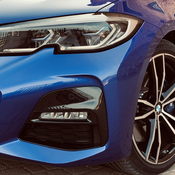 By GolanTrevize21
32 comments
This is an awesome BMW M3 designed to fit in the new 8 stud standard used by the Speed Champion series.
I think BMW has a great past on Motorsport so this car can represent this. I have build two versions of it, the red one is the Evo version from 1989 and the white one is a version used for the DTM the German Championship of mass produced touring cars.
The car has been built with a engine bay where a 4 cylinder fits perfectly, has a second row of seats and even there is space in the trunk trying to make it more realistic.
I think this could become a great lego set for collectors but also for those people like me who enjoys a lot building with their own children.