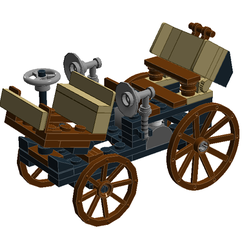 The French engineer Joseph Nicolas Cugnot started working on a steam self-moving machine in 1765. I tried to reproduce the "Fardier à vapeur" (Steam Dray) in 1771 version, when he added the braking system and created the first automobile ever, which could carry 4 people and move at 4 kmh (Wikipedia source).

I tried again to keep the scale compatible to a minifig-sized playset. Obviously the spoked wheels oriented the model sizing, but I like to keep my models handy, simple and affordable.

The copper-coloured parts were possible thanks to LDD extended and do not exist in Lego market, but I think they are essential for the model overlook. The weak point are the proportions: compared to the real thing, the front boiler is too small and the cylinders are too big. If the idea gets successful, I'd like that a special part for the boiler might be designed.

For the subject choise I was suggested by a member of this Community. I hope I can see the project approved soon and thank him personally in the comments.