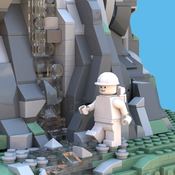 By Lego Brick Builder
29 comments
Hi there! I haven't submitted a dinosaur model yet, and, as a matter of fact, I haven't created a dinosaur for a couple years. When I decided to make one, I wanted to give it a robotic twist. I hope that you enjoy my newest submission, Robo-Rex!
Robo-Rex is definitely the one of the most successful dino builds I have made. I originally was going to use red 1x1 round tile pieces that look like a quarter of a 2x2 circular tile, but decided to use lever bases instead( I used these for the frogs in my product idea, The Pond ). I don't think that there is anything else worth mentioning, so I'll get right into Robo-Rex's story( I know that you all are waiting in suspense 😲 ).
The Story Behind Robo-Rex
In a lab a scientist, Dr. Stud, wanted to recreate a T-Rex in robotic form. He and his assistant, Jacob Fig, worked tirelessly. Their tests had failed so many times that they nearly gave up the project. But the bright assistant discovered that the control panel had not been correctly placed on the robot. After this quick fix, their invention worked. As soon as the robotic T-Rex turned on, it hungrily stared at the two scientists and then let out a loud roar. In the nick of time, Dr. Stud, pressed the " nice " button on his remote, and then Robo-Rex, behaved just like a pet. The scientists later went on to showcase their stunning invention to the world.