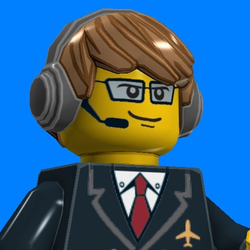 The Beechcraft King Air family has been in continuous production since 1964, outselling all other competitors in its class, combined. These beautiful planes look just as remarkable in Lego form.

As this aircraft is so popular worldwide, the model sold should be able to be changed to reflect some of the various uses, such as executive and medi-vac configurations.

A few of these planes are owned by The Lego Group and are begging to be made into brick-form! As the intention is to stay Lego themed, I propose that each model is sold with actual Lego Group colors and registrations.

The model could be shortened or lengthened to create any of the members of the King Air family. This particular design is very similar in size and piece quantity as the Lego 787 Dreamliner model 10177.

I would like to give a huge thanks and honorable mention to King Air Nation for all their support and help on gaining votes for this project: http://kingairnation.com

I would like to thank MrSsorg for help with setting up a project. The DC-3 by MrSsorg would look beautiful alongside a King Air: http://http://lego.cuusoo.com/ideas/view/17534

To see more of the King Air I built visit my Flickr page: http://www.flickr.com/photos/spider689/