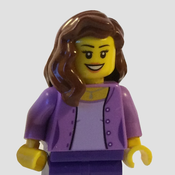 By Bongalonga
15 comments
Arriving by train is the very best way to visit Lapland. The land of snow and Santa! Where there's snow, there's snowmen, snowballs and skiing. But don't worry, there's a fire, fresh cookies and plenty of hot chocolate inside to keep the passengers warm while they wait. And who's that I see enjoying exactly that? It's Santa himself and Mrs Claus, just casually minding their own business. The locals are used to seeing them around, so leave them in peace. They're all also used to the local fauna, which is lucky because there's plenty around!
I was inspired to build this station so our Lego Christmas train (set 10254) had a station to leave from, before its long journey delivering presents. I wanted it to have a Christmas feel, but a fairly subtle one - I'm all about low key Christmas. In fact, I'm actually something of a bah humbug, so building Christmas Lego is about the only thing that gets me into the festive season!
As for the local fauna - this set features a reindeer, husky dog and brown bear. It was whilst building this set I learnt that there are, believe it or not, no polar bears in Lapland (other than in the zoo!). There are wild brown bears though, so I decided to feature one in the set.
There are 710 pieces.