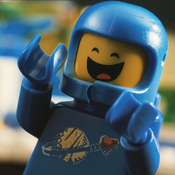 By Ruimtegast uit 1975
15 comments
This build is based on the 'vintage' board game 'Ludo'
In Dutch, it's called 'Mens erger je niet!'
Its easy rules makes it a game for all ages. I guess it's the first game I learned as a kid, and I'm still playing it with my own kids (besides LEGO of course). What's better than to combine the two?
I built this because, besides being a yacht exterior engineer, I prefer engineering in LEGO, because... it's LEGO! And also because of the reasons given above.
My guess is, a total of 250 parts could make this an affordable board game. The dice is included of course. As you can see, the design is 'foldable' for easy and compact storage
Different existing games are possible in this setting. You could collect more of those, and store them in a LEGO-made travelling box!