Back to Mars: The Missing Link

By MyBrick
14 comments
Please refer also to the main project Back to Mars - a classic space theme!

Back to Mars: Five years ago mankind landed on the Mars to start an extensive exploration and mining project.

Crystals were collected and transformed into energy, but one day a disaster occured. During an exploration to find new resources the humans were attacked by aliens. These aliens tried to rule the planet, living in a home cave called Hive.

[Main Idea: return to Mars after 5 years; macro parts (or better called building blocks) can be shared by models; mech should look like astronaut and droid like mech (droid is a mini build of mech), squad of droids; different tools for mech; hordes of aliens in hive; defeat aliens with anti-gravity bomb; start colonization; begin terra forming]

After a long time being in battle, the human race started to fall behind. It was time for some practical inventions. The humans started working on a top secret project called "MP-501" and after three months of engineering it is now quite quickly reaching its utilizability.

Hopefully the tide can be turned. Let the next chapter of the Mars Mission begin... 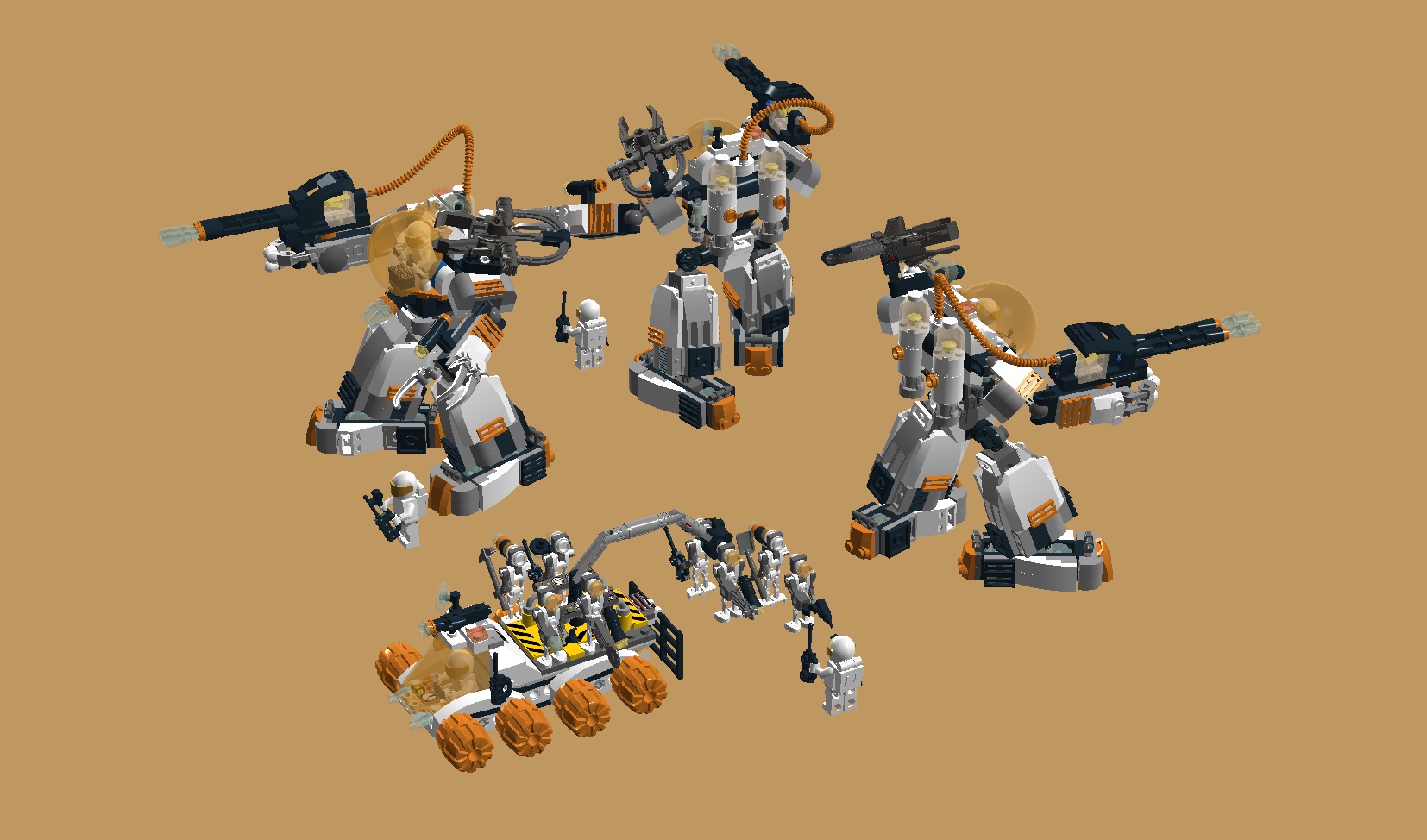 The engineers developed a multi purpose mech which is not only able to mine in rough terrain and repair the human base or vehicles, it can also intervene in heavy combat situations and guard the human home base. The mech - a macro version of the mining robot - can adapt its capabilities dynamically. A small support vehicle delivers different types of tools and weapons depending on the situation. The small support vehicle is defended on its way by a mid size spaceship. This spaceship can additionally support the mech during tough battles, it can guard the human base inclusive vehicles and ships. In urgent cases the small support vehicle can also be picked up by a dropship to bring it quickly closer to the mech or out of critical situations.

Because the number of active Mars Mission astronauts is limited and new crew members need years before they arrive, a complete squadron of droids were developed to join the astronauts in mining and battle. These droids (looking like a mini mech) have got their own heavy dropvehicle with an advanced suspension system which takes them to the crystals or front line. They are equiped with a wide range of tools that makes them usable in nearly all situations. The reduced amount of material needed to build them up makes it possible to create them directly on the Mars. A small contruction platform is available to repair or build them up. This robot arm can be applied to the dropvehicle chassis or to the home base. 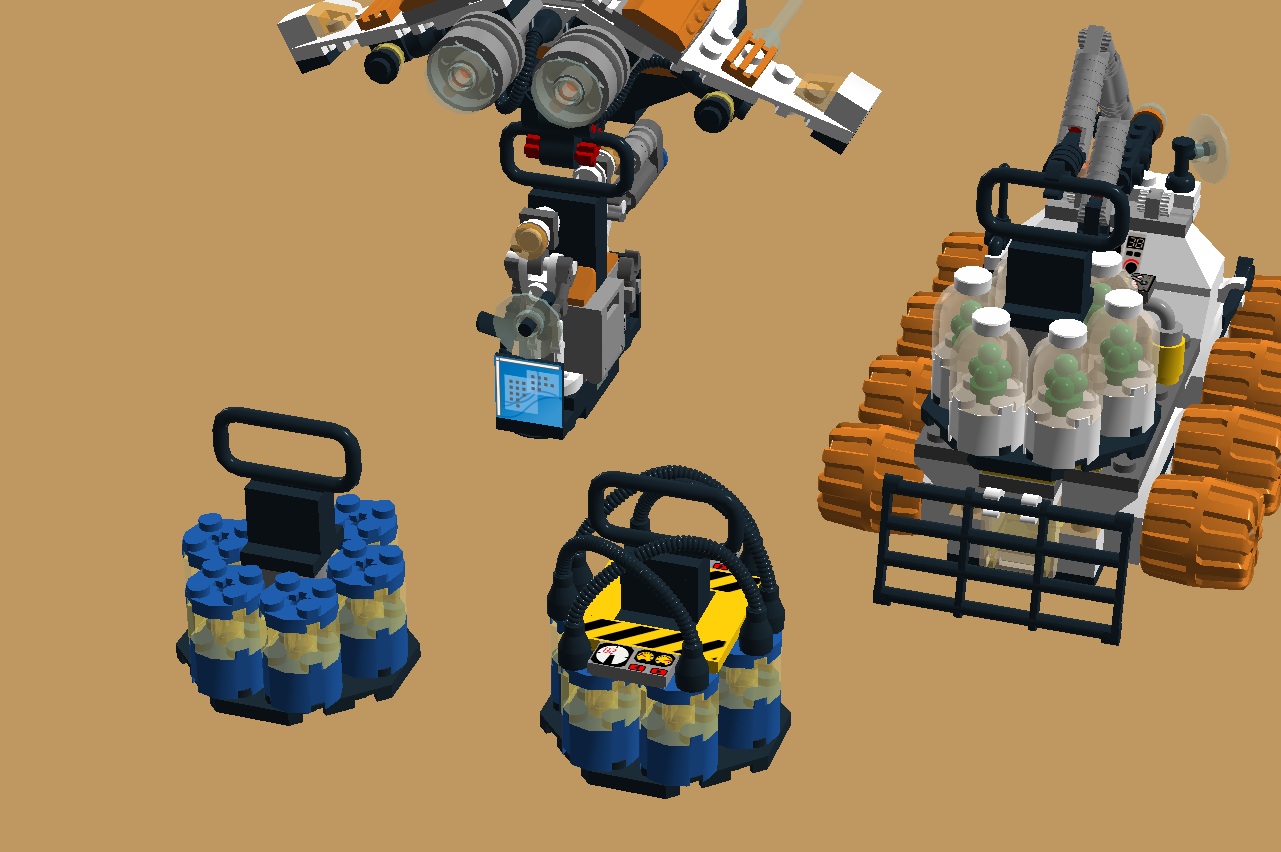 Then the battle started. The humans were able to get back the control, but the engineers still had a problem: Defending the home base for years or trying to get rid of the aliens? As long as the aliens are on the Mars the next two phases of their mission cannot be started. Phase one would be to build up a colonization and phase two would be the beginning of terra forming the Mars.

So how to get rid of these nearly invulnerable aliens? The engineers remembered the data collected by the scientists from the Large Hadron Collider at CERN on Earth and as a result the Theory of Dark Matter was confirmed. Based on this knownledge the engineers were able to modify a battery pack into an anti-gravity bomb. Once this bomb would be activated in the Hive, the aliens are going to be blown away from the surface info space. And all this would be possbile without creating any contamination on the Mars. Now the launch of the bomb in the Hive needed to be evaluated. The solution was a simple make-over of the "Avenger" spacecraft: The ship was extended with a dropship adaption that can carry not only some droids or a battery pack, this adapter was capable to carry the anti-gravity bomb. 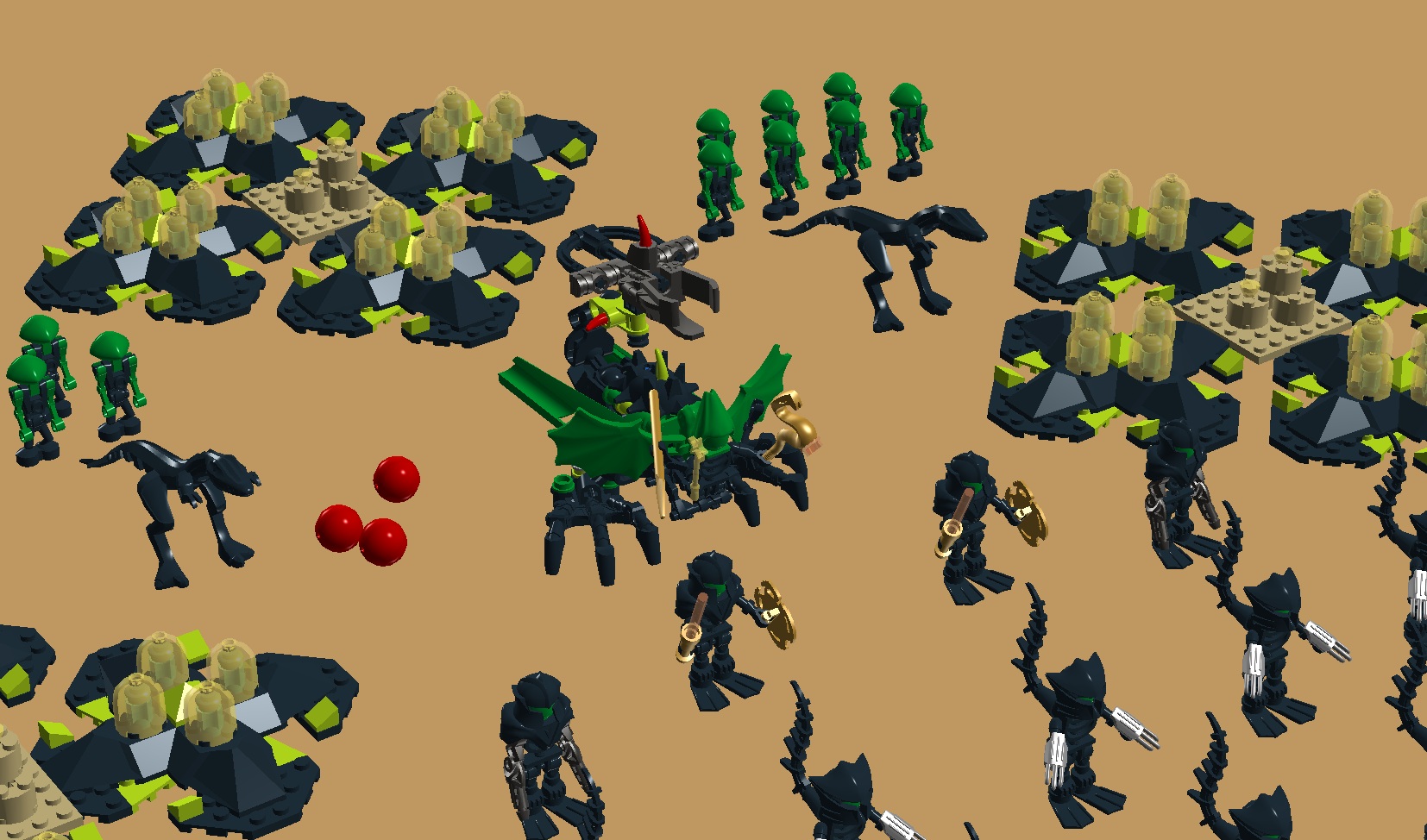 The Hive is a accumulation of combs like a bee hive to breed hordes of aliens, shepherd by a couple of "Drones". The "Alien Queen" controls everything like a beemaster protected by her "Guardians". She commands the attacks by mobs of "Berserkers" on the humans.

After all the needed preparations were done, the mission was started against the alien hordes... and was luckily a complete success and the aliens were displaced from Mars. What a glorious victory! Now it's time to start the phases "Back to Mars: Colonization" and "Back to Mars: Terra Forming", but that is a different story (or should I say idea?). And perhaps in the future a capital city will grow up ("Back to Mars: Olympus Mons City"). 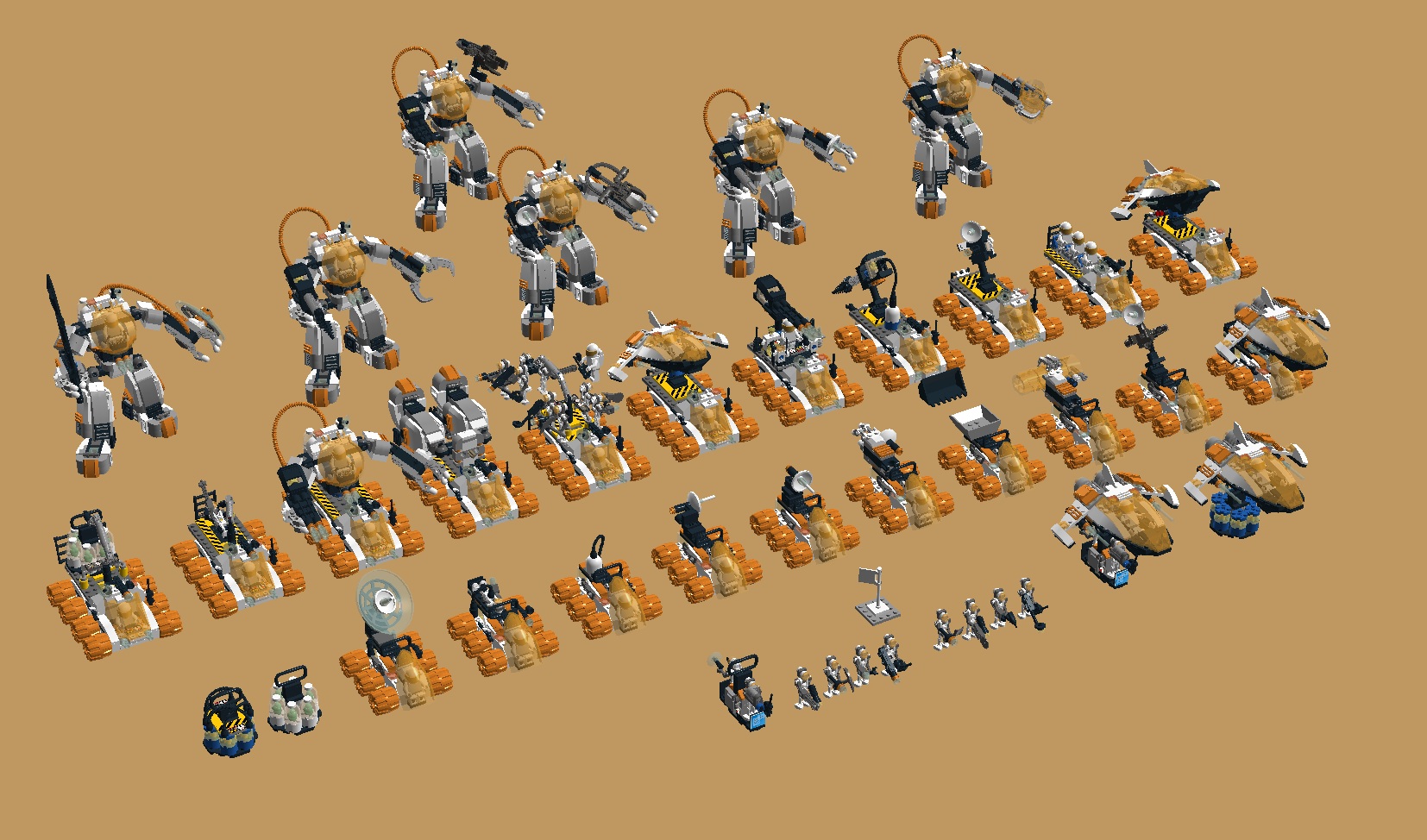 Details about "Back to Mars: The Missing Link" MP-501 - (M)ulti (P)urpose Extension Kit

Digital Designer 4.3 was used to create the extension. Many other possible models are also available and more designs may come up in the future, all based on the content of ONE set. More than 30 different models have already been created!