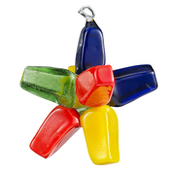 By Romulus4
5 comments
A chess set – multi-coloured / white. Being a chess player, I wanted a set that moved away from the traditional colour palette that chess sets are often made in. They tend to inhabit the dingier end of the colour spectrum. I also wanted to try and design something that celebrated the Lego elements themselves – the crisp lines, the shapes and the beautiful colours. The pieces themselves were inspired by a 17<sup>th</sup> century Islamic set - depicting figures is prohibited in Islamic art so they had to be more abstract with their forms. I have attempted a small nod to sets of the western tradition; the rooks have castellations, the knights stylised ears -  I also attempted a ‘tonsure’ for the bishops. The pawns were modelled more on the Queen than the King as, rightly or wrongly I always see pawns as her foot soldiers rather than his.  Being multi coloured vs. white I needed to echo that in the squares. Just multi-coloured squares wouldn’t work as it might be too confusing for the players but the white Lego grills allowed me to unify the coloured squares whilst allowing some colour to come through. You will notice that there are no studs on the squares – this too was very important to me. If you play chess then you will know that you often push or slide the pieces and studs don’t allow for this. I wanted the set to be a practical one so I split the board to create a box to hold the pieces when not being used and for moving about. I explored so many ways of doing this but landed on this way as it was so simple and works and one uses the same little black technic pieces for all the connections required. I hope it isn’t ‘illegal’ (I’m sure someone will let me know) I don’t think it is as one of my children has a Lego set where this system is used for connection. I also needed the pieces to be very solid so each chess piece is constructed from Lego pieces with holes through the middle. This allowed me to push the Lego plastic rods (sorry don’t know the official name for this piece) up through the middle resulting in a very firm and secure build.
I think the number of pieces is around 910  - It is not a complicated build but (I felt) a satisfying one. Anyway, thanks for getting this far and it would be lovely to hear people’s thoughts……