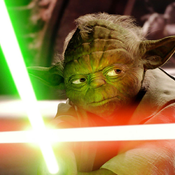 May I present starfighter A-Wing. This is a powerful ship which can be subjugate by great pilot or experienced Jedi only.

This A-wing model has been built to show how important and valuable the fighter was for The Alliance and New Republic. Its fast and agility were no match among the other fighters of The Alliance. That's why a pilot had to have excellent piloting skills to control the ship and to win battles in the space.

Based on detailed A-wing data sheets I built starfighter with all functions which it would have as a real vessel. Those are:

- deflector shield generator on the top of the fighter behind cabin

Especially I am proud from missile launch system which is in the cabin. It makes the model more realistic and allowed me to fix the launchers inside wings. To release missiles a pilot has to pull up the levers located on both sides of the cabin. Missiles' reload works without any problems.

Size of the model is 25x17 cm. Colours are similar to The Alliance painting.

If you like it I invite you to vote.

May the Force be with you...