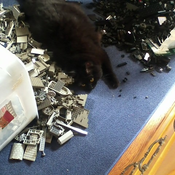 LEGO Sports continue to be my inspiration and playable sets are my aim. LEGO already made a hockey series but not like this. I've worked hard to create a playable, arcade bubble hockey inspired, 5 on 5 set. Hockey is my favorite sport and I feel like a set like this can bring the level of playability and enjoyment that the LEGO Soccer series has.

The idea for this set is simple but the execution was quite difficult. It mirrors that of your typical bubble hockey game. I had to create a base that had paths for each player to move in while also looking like an NHL ice surface. The mechanics used to make the players both move back and forth and shoot were not hard to come up with but not easy to put together. The last 2 pictures show the underside, and while it may appear messy the player controls are essential. A technic rod runs horizontally and is attached to a vertical rod, both with interlocking gears. When the rod is turned the player spins.

This set is a lot of fun and I think if I had availability to more LEGO bricks I could make it easier to build and more fun to play. I used only pieces I already owned. The set includes two teams of 6, 5 skaters and 1 goalie each. The far end has flags that are used to keep track of the score.

Bubble hockey is an arcade favorite and if LEGO were to produce this set anyone could bring a piece of the arcade home. I think kids and adults would love this set. It could be a game between parent and child, between friends or a great addition to any game room.

Speaking of game rooms, if you like this please check out my other sets:

All are playable sets. Also check out my Kitchen and Colossus