Subnautica: Underwater Base in the Grand Reef 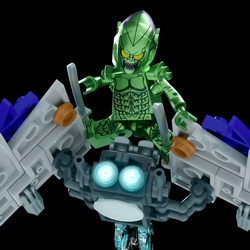 My Project: Based on the popular underwater survival game SUBNAUTICA, created by Unknown Worlds Entertainment, this is my sixth Subnautica LEGO set that I am proud to show you all. It is called "Underwater Base in the Grand Reef", and it depicts the player's large underwater base in the biome known as the Grand Reef.  The base includes many base-building elements straight from the game, as well as fauna and flora from the biome itself.

How I did it: As with my other sets (check them out on my page and make sure to smash that support button), I used my own game copy as well as the Subnautica Wiki and built a base in the Grand Reef, then painstakingly recreating that base using the LEGO Digital Designer. As always, I have included links to the pictures I used down below.

Description: Our lone survivor has been stranded on Planet 4546B for many months and has grown accustomed to the ocean world.  He has built a massive underwater base in the deep biome known as the Grand Reef, which is rich with edible flora and fascinating fauna.  In his cozy home, our diver has furnished every room and personalized it to his liking, displaying different trinkets from his many adventures on the planet.  He has to be careful though...his not-so-friendly neighbors are the vicious Crabsquids, who venture closer and closer to his base in an attempt to get at the tasty human inside.  Will he manage to outsmart them and avoid their electromagnetic blast attacks? You decide!

2. Modular design enables you to disconnect the base pieces and form them into a new set.

4. The first set of Multipurpose Rooms includes a "power room" on the first floor, which includes a Nuclear Power Reactor, a Nuclear Waste Disposal, a Lab Table with Nuclear Reactor Rods, and a Medical Kit Fabricator; and on the second floor, a "food room" with a Growbed, a Lantern Fruit tree with removable fruit, Marblemelon Plants, a Coffee Vending Machine, and a Water Filtration Machine.

5. The second set of Multipurpose Rooms includes the player's laboratory on the first floor, which includes Lab Tables with various Lab Equipment and a Jack's Septic Tank, an Aquarium, a Fabricator, a Desk and Chair, a Dive Suit stand, and a Storage Locker; the second floor makes up the player's "bedroom", complete with a Bed, a Bar Table, Two Living Walls, a model of the Aurora, a Markiplier doll, an Arcade Gorge Toy, and Plant Pots (the two rooms are connected via a ladder).

6. The third set of Multipurpose Rooms is dedicated solely to a double-stacked Alien Containment Tank, which includes a Creepvine with removable Creepvine Seed Clusters; this room also comes equipped with a weapon rack which holds the Stasis Rifle as well as the Propulsion Cannon.

7. The Scanner Room's roof can be removed to access the interior, which includes the Scanner Room Upgrade Fabricator and two Camera Drones.

8. The Scanner Room also comes with a detachable terrain hologram so the player can search for materials.

10. Illuminate the base and its surroundings with the two included Floodlights; scan different flora and fauna with the Scanner; fight off aggressive fauna with the Propulsion Cannon and Stasis Rifle; and travel around the biome using the included Seaglide.

11. All Hatch doors, including the one on the Alien Containment Tank, can be opened.

Compare: Here are the links to the wiki pages (scroll down to the gallery to find pictures)

Thanks for checking out this project! Please check out my other sets on my page as well, which features the survivors of the Degasi in the Jelly Shroom Caves, the wonders of the Safe Shallows, and the terrifying Ghost and Reaper Leviathans! If you're a fan of the game and want this to become a real LEGO set, please support and share with your friends! More Subnautica sets (including a Cyclops, Moonpool, and several Precursor sets) coming real soon!