The Iron Giant with Hogarth 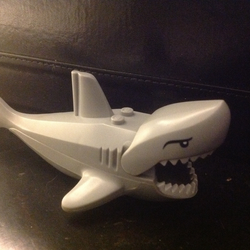 This set comes with The Iron Giant and Mini Figure Hogarth equipped with his trusty BB Rifle.

The Iron Giant is truly a giant measuring at 13 inches tall. The Iron Giant has many points of articulation, making for some great poses. Recreate some of your favorite scenes from the Iron Giant, from Hogarth's first encounter to many others.