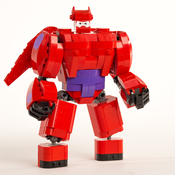 Introducing Toothless and Hiccup from the movie How to Train Your Dragon.

The wings, tail, head and all four feet are adjustable. There is a rope going back from Hiccup's saddle that connects under the small tail wings to adjust Toothless's broken tail, which appears in red. From wing tip to wing tip the set measures 15 inches (38cm) and from head to tail 12 inches (30.5cm). It consists of 232 pieces, one sticker, and one minifigure of Hiccup with his blazing sword.

A difficult part of the build was figuring how to make the tail look right and be strong. After many failed attempts I finally found one that looks accurate and is strong. The hinges that make the wings adjustable are completely hidden when the wings are extended straight and only partially visible when bent. The most difficult part of the build was constructing Toothless’s head in minifigure scale. This meant that the dragon’s head had to be really small, which proved to be very difficult. I hope you are as happy with the final result I am.

In the final version of the set a few of the colors would like they are in the cover photo (thanks Joel for your help with the cover photo!). Some of the small joints would be black instead of light or dark gray and Toothless's claws should be silver instead of white. These pieces are currently not available in these colors but I wanted to share with everyone a built set.

Please support this set. With its small size, playability and popularity of the movies this would be a fun and affordable set.

There are lots of great Ideas to support, so please look around. And please support my other project from Big Hero 6 of Baymax and Hiro: https://ideas.lego.com/projects/115875