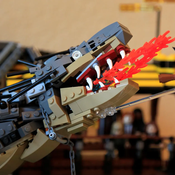 By LegoEverywhere3
55 comments
That's right everyone, it's here, a potential LEGO Ideas set of the iconic 60s TV Show, Gilligan's Island! Since 1964, audiences from around America were laughing at every corner during an episode of Gilligan's Island. I seek to rekindle the love for this TV Series with this LEGO Ideas set. Fans of all ages will enjoy building an amazing set of an equally amazing show.
Features include the following: the S.S. Minnow, palm trees, a display stand for the seven castaways, two crates, the dining table, and Gilligan and the Skipper's hut!
Minifigures included: Gilligan, The Skipper, Thurston Howell III, Lovey Howell, Ginger Grant, The Professor, Mary Ann Summers, The Robot, The Gorilla, and the Ghost.
With many features, scenes from the show can be easily represented. I hope that you enjoy this collector's set, and please support this project. At 200 supporters, 500 supporters, 1000 supporters, and every additional 1000, I will add a build to the set.
If you have any suggestions for these additions, please share them in the comments section.