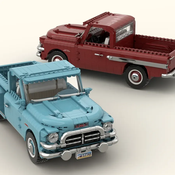 Amilcar was a small French cyclecar and automobile manufacturer that operated between 1921 to 1940, the name was a contraction of the founders names – Joseph Lamy and Emile Akar. The company started out making cyclecars to meet the surging demand in France, caused by government incentives for vehicles with a dry weight of under 350 kilograms and seating for no more than two adults.

It wasn’t long before the attention of Joseph and Emile turned to motor racing, it was (and probably still is) the single most effective method of promoting a new sports car and the halo effect of a successful racing campaign benefits the marque’s other models. Due to the company’s background producing cyclecars they chose to focus on racing in smaller engine classes, and one of their most identifiable models was the car you see here – the Amilcar C6.

The Amilcar C6 was introduced at the Paris Salon in October of 1926. It was built to provide an option for the company's sporting clientele that were requesting a customer version of the CO, the firm's world-beating six-cylinder racing car.

The C6 was powered by a 1100cc twin-cam six-cylinder engine fed by a Roots-type blower and advanced dry sump lubrication system. The engine offered 60 horsepower which was an impressive figure considering the cars 1200 lbs overall weight. The max speed was of 165 km/h (102,5 mph). This made the C6 a genuine miniature grand prix car. It came with Spartan, two-piece bodywork, twin rev-counters and intricate controls. Pricing began at 60,000 francs, putting it somewhere between a Bugatti 37 and Bugatti 35A.

The LEGO set it's composed by: an Amilcar C6 car model (+ engine), an engine crane, a "wooden" bonnet car holder.

COLORS of the car model:

Is it possible to choose between the following "original" colors: