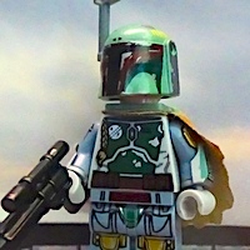 A variant from the popularly used R-14 Compact Attack Mech line, the all-new P.A.N.D.A. Defense Mech brings something new to the world - a cuddly robot. Like its predecessor, the P.A.N.D.A. is mainly used for domestic issues like a police team would, but every once in a while it is deployed on foreign ground as well. When the pilot climbs into the seat, the front folds up in front of him and the arms fold down from the back. On the end of it's right arm is a blaster cannon with variable strength and on the right is a mechanical hand for picking things up with.

However, now the manditorily panda dressed pilot has a companion: the Mini Mech. This new friend assists the main Defense Mech by scouting ahead for recon or lending it's blaster arm to a pilot in trouble.

I used many small technological looking pieces to give it the look of a real robot. It took a while to get all those little pieces connected, so please fulfill the purpose of my work and SUPPORT!! Thank you!!