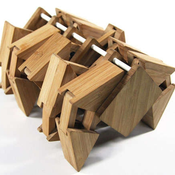 When there is a place too dangerous or a job too risky for a minifigure, send in the RAVs!  These Robotic Autonomous Vehicles have been specially designed to perform a variety of tasks in locations too harsh for normal minifigure life.

The Land Drone (technically known as the Land Rover 60, or LR60) can navigate with ease through rough terrain, thanks to its four clawed feet and high clearance.  This tough robot can blast, cut, chop, slice, or melt its way through any obstacle.  When it reaches its destination, the MR60 land drone can use its highly advanced battery of on-board sensors to take measurements, interact with its environment, record video and audio, and then transmit the information back to scientists.

The Aqua Drone (technically known as the Water Cruiser 70, or WC70) can propel its way through even the most fierce water conditions, including crushing pressure and powerful currents.  Finding the best path through even murky waters fighting off attackers such as hostile sharks and marine life until it arrives at its destination.  Once there, the WC70 will transmit such important data as water temperature, living organisms, and material composition.

Finally, the Air Drone (technically known as the Sky Eye 90, or SE90) can rise far above commercial aircraft to monitor weather conditions and take dangerous readings in the middle of storm clouds.  With its state-of-the-art technology, the SE90 can remain level even in gale-force winds, and its three strategically position multi-sensor cameras can stream live video back to weather stations around the world.  As an added precaution, the SE90 is also fully equipped with defensive weapons to prevent competitors from damaging or stealing the top-secret tech.

Not only will people of all ages have a blast building and playing with this amazing set, but the collection of rare pieces will inspire creativity in all who love Lego.