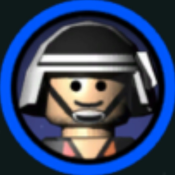 This mech includes a special connecting system to hold the pilot on the mech.

Fighting inside the mech is heroic pilot Richard Xavier, a special agent tasked with patrolling the cosmos and fighting criminal aliens or humans. An evil alien and UFO are also included in this set.

The alien, Bloobarp, is a criminal working for the Shadow League, and his UFO comes equipped with a spinning turret for his brother Glooglork to fire. Fires missiles and can detach from the UFO as an escape pod. Also comes with two laser guns for the aliens to use when not in their ship.