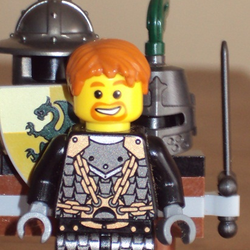 In Melbourne Tonight - a live TV variety show which was on air between 1957 and 1970 in Melbourne. Though every Australian capital city had their own In (city name) Tonight.

The host was the late Graham Kennedy (1934-2005), one of the most talented radio/TV/film performers in Australian history.

Always one to play practical jokes and stunts on his follow performers, here his most famous on screen straight man Bert Newton is trying to advertise Raoul Merton mens shoes and Graham is sneeking up on him with a custard cream pie - good old slap stick comedy.

This project contains only 97 parts which includes minifigs and props.

Just a perfect little TV stage design, with a TV crew behind the camera.

Cost of this project would be under 40 dollars Australian.

If you like this project, if you are an Aussie and remember the genius who was Graham Kennedy or enjoy the fine work of Bert Newton then please support and following, thanks for reading and Brick On everyone !