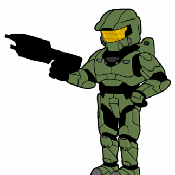 By opto
0 comments
(if this is short and brief its because I'm a rookie.)
I was thinking about a series about Robots in space fighting each other in a battle for the Galaxy. This is series 1 of such a series. As you can see series 1 is the forces of planet U-Don from
left-to-right. The characters are U-Don Jouster, King Droid of Plant U-Don, U-Don Assault Droid. Series 2 will be coming soon.