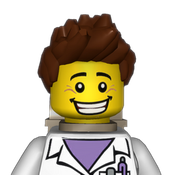 The Mac was first released on January 24. 1984. It was the first commercially successful personal computer to feature two old known then, but still unpopular features—the mouse and the graphical user interface, rather than the command-line interface of its predecessors according to Macintosh - History of Computers.

This model has some cool details like the mouse and keyboard. On the back of the computer it has 3 1x1 angular bricks as usbs.

I thought this would be a cool model to have if you like computers or just want a cool model.

I think this would be a good set because it looks nice and there are not many computer sets.

I hope everyone likes this model.