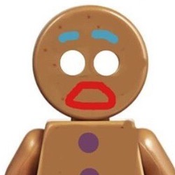 By NotWod
76 comments
This set was made in collaboration with user Bricktory Lap , who has provided explicit permission to use any and all of his work on the project.
Ben 10 is a theme that I think is very deserved of a minfig scale set due to its constant popularity throughout the years and nostalgia that it brings to so many people. This project is based on the Rust Bucket which is the main vehicle in the series. I decided to make the rust bucket, as when I think of Ben 10, its the first thing that comes to mind. Things included in the build are a stove and kitchen area, the wheel, and a couch are for the characters to relax. As well as this, the roof of the build is easy to remove.
We have attempted to recreate the rust bucket as accurately as possible, as well as creating new prints for the figures to embody the iconic aliens that Ben turns into throughout the series. Recreate all your favourite scenes from the Ben 10 universe! Please remember to support the project to potentially make Lego Ben 10 a reality. It is really appreciated from us!
I have also decided to add 7 minifigures and 1 micro-figure in this set including:
- Ben 10
- HeatBlast
- Ghostfreak
- Fourarms
- Diamondhead
- Grey Matter (micro)
- Grandpa Max
- Gwen
We need 10,000 supporters for this set to be considered for production, so please share and support!!