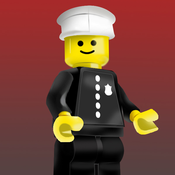 This model is called Red Fort, it is replica of the real thing situated in country India. It is made up of 1023 bricks, there will be so fun in building it. It has smart builds, there are many extra bricks in order to support the fort, so it is also very strong!

There are many black windows on the base wall of the fort. some climbers are seen climbing the wall of the fort. The real thing is so old, therefore we can see some open bricks. There is a nice grassy surface over the base wall, on that surface there is a walking area made for the tourists to see the fort more closely. As you can see there is a stage like area with some height Vip's to give speech. Now the actual fort starts, the real fort was so long, it has four long walls which made its structure square like. This model is only replica of one of its wall's one of the part. There are curved walls with grate details on it. After that there is a security fence. The top most dome like structure was made for the guards of the fort to protect the fort. Between them there is the India National Flag, it is also made by bricks.

In front of the fort, there is a road and some plants on its side. The set includes a taxi, scooter and five grate mini figures.

I think it to be a Lego set to spread the greatness and monuments of India, as I am an Indian.

If you like this project then please support it.