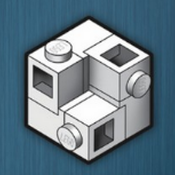 The Ford Lotus Cortina was a speedy compact race car produced by Ford from 1963-1970. It had a 1557 cc straight-4 engine capable of speeds over 100 mph. The iconic green and white color scheme was used on most Cortinas produced. After 1966, the Lotus Cortina Mk2 replaced the old one, and stayed the same until 1970.

This is a mid-sixties version of the car, and had many functionalities, including opening doors, trunk, and hood, and a detailed interior and engine. I built it 10-stud wide, because there were many pieces that worked well in those dimensions, like the wheels, headlights, and fenders. Probably the hardest part about designing this model was getting the hinge on the hood to work without being blocked by the wind shield. There are some other things that I'm not completely satisfied with, like the slight gaps between the doors, trunk, and hood, but overall I think the model worked quite nicely.