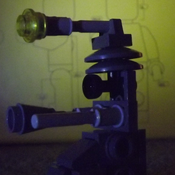 This model focuses on my favorite city and capital of Wales, Cardiff.

As with other skylines, Cardiff has many iconic landmarks and buildings, some of which cannot be seen anywhere else. I have decided to pick 6 of the highlights.

If you wish to find out what these buildings look like in real life, you can look for their images on your local search engine.

These are (Left to Right):

This would be an exceptional model, expanding on builds for the United Kingdom and Wales' only official LEGO model based on its capital city.