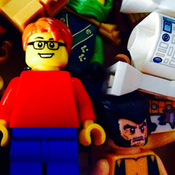 Humans have only explored a tiny section of it, yet the achievements made whilst doing this are phenomenal. I therefore decided to honours these steps into the great unknown in LEGO scale!

Within a museum-like environment I designed 6 famous spacecraft and an astronaut's suit that I think best summarise man's exploration of space.

I think it would be great to have a more educational LEGO Ideas set so the set would include information about each spacecraft, hopefully giving kids more interest in space. It's a simple yet effective set and would be valued as a collectors item.

Note:  I had to create this model on LEGO Digital Designer as many of the parts are not currently available in the required colours but I think it would be worth producing them for this set.