The Lego Labyrinth *Board Game* 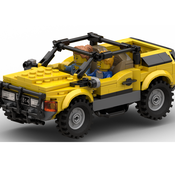 The lego labyrinth "where is my body?"

The main goal in this game is to get your hero complete and by doing so you have to move around in the labyrinth and collect the parts you need. The parts must not be of your own color.

The good thing with this game is that every new gameround will be unique due to the bottomplates' ability to move freely picture 3 and be placed in any direction as long as there is room picture 2.

Also the frame around the map can be easily dissasembled and remade into smaller parts to make a 2 player map picture 1.

In picture 12 you see an example on how your hero could look like like when fully equipped.

You roll the 2 dice and move your heroes head the number of dots shown picture 13 untill you reach the first part you need, the torso. In picture 11 you see at which order you must pick the parts up.

Once you have collected a tarso you move as in picture 6 and continue to move like that for the rest of the game. To be able to pick the part up you must move untill you reach the black brick and stand on top of it as shown in picture 14. When you have collected 2 skates your movement will become doubled, so if you get an 8 you will move 16 steps. There are also 4 different-colored circles on the map and those are teleporters. If you step on one you can teleport to the other one with the same color. picture 6

Blue card: move in one direction instead of rolling the dice and move untill you hit a wall. picture 7

Black card: switch place with another player and then roll the dice. picture 8

Red card 1: place a colored brick anywhere on the map but you can't make the road unreachable. pic 9

The first one to equip all parts and return to his starting point is the winner.

:The parts MUST be of your own color

:The weapons are of different rang. from 1 to 16 and if you meet another player who has a better weapon than you, you have to give him one of your parts of his chosing. The weakest weapon can however win over the strongest one.

That is about it and if you have any questions about the rules feel free to comment and I'll answer asap :)

:The torso will not come with any hands because the hands will be placed on the handlebars as a pickup, I just couldnt separate them in LDD

:The torso that the armor rests on should not have any arms, I know there are models like that but I couldn't find any one in LDD