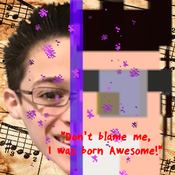 By AwesomeBilly3
7 comments
Wiiilllsooooooon!!! Oh, there you are! This is Wilson, and no he isn't a volleyball with a red handprint for a face. He's a plywood gear that was created accidentally due to a CNC Machine error. Wilson was created by Martin Molin, a member of the Swedish band Wintergatan as well as the creator of the Marble Machine X. Wilson is the mascot of the Wintergatan YouTube channel and has slowly gained an army of clones due to the love and adoration from people in the community creating their own Wilsons.
I built Wilson out of Lego because there isn't a Wilson built out of Lego yet. It's as simple as that. People in the community are always trying to make Wilson's out of new materials, and nobody has made 1 out of Lego yet. (plus being the 1st to make him out of Lego might set the stage for others to try their hand at designing 1 themselves ;P)
I feel that Wilson would make a great Lego set especially for all the fans and followers of the band Wintergatan. It's not easy to make your own Wilson(trust me, I have made multiple plushies and it's not an easy feat.) Besides, who doesn't want a Lego model of a plywood gear with a smiley face on it?