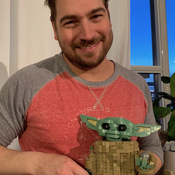 Since the first Star Fox game came out in 1993, I wanted to build a Lego version of the flagship starfighter of the series: the mighty Arwing. The Arwing has a very unique shape that I always loved. Very recognizable and the fact that it looks like the head of a fox is also a great concept (Nintendo kept it almost unchanged in all its iterations).
Over the years, I saw amazing sets of new Lego series with wonderment: Ninjago, Galaxy Squad, Exo-Force. Seeing how certain new parts were used was inspiring and brought me closer and closer to my dream of building a great Lego Arwing (the addition of the 8 x 4 x 2 windscreen, the wedge 10 x 3 and the modified 2 x 3 pentagonal in particular were key).
In March 2020 came the pandemic, and the lockdown, forcing us all to stay home. This was the perfect opportunity to build my dream Lego set: a minifig scale Arwing.
About the set:
This is a set that features the Arwing starfighter and its maintenance bay. The set includes a "Computer Diagnostic Bay,” a "Launching ramp" (that is also a refuelling station) and a "Repair buggy" that also acts as a crane and ladder to access the starship. The "diagnostic bay" also features a "go for launch" / "no go" set of lights. The launching ramp is inspired by the way the Arwings are launched during the intro of Star Fox 64. In the game, Arwings do not have landing gear and are taking off by sliding off of a ramp. In this set, the Arwing is built with "door rail plates" on its belly and it slides into the ramp using groove bricks. There is also a locking mechanism so that the Arwing does not fly off the ramp until cleared to take off.
The set is minifig scale.
Included minifigs: I was only able to come up with Fox McCloud and Falco Lombardi (because of parts availability). I imagine the final set having all 4 Star Fox members (Fox, Falco, Peppy, Slippy and also Rob).
Colors:
The top of the Arwing is light bluish grey
The belly is regular white
G diffusers and gun pods are blue
There are little accents of dark bluish grey and yellow triangular tiles at the tip of the wings
Pieces:
The Arwing itself has in-between 450 and 500 pieces
The entire set is closer to 800 pieces** (recounted)
Similar sets:
Home One Mon Calamari Star Cruiser, set # 7754 (featured a single mini-fig scale a-wing)
Poe's X-wing Fighter, set # 75102
Airport Air Show set # 60103