The Seven Wonders of the Ancient World 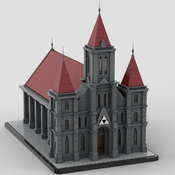 The Seven Wonders of the Ancient World

From left to right: The Temple of Artemis at Ephesus, the Hanging Gardens of Babylon, the Statue of Zeus at Olympia, the Lighthouse of Alexandria, the Great Pyramid of Giza, the Colossus of Rhodes, and the Mausoleum at Halicarnassus

This model I built depicts the Seven Wonders of the Ancient World in microscale. These structures, built thousands of years ago, were located around the Mediterranean Sea. Unfortunately, the Great Pyramid is the only one that has survived over the millennia.

As a fan of architecture, I was naturally inclined to create these marvels of design in LEGO form. I tried to pack in as much detail as I could, and also use lots of tiles to create a very smooth build. The Wonders are built on a black Architecture style stand, which is complete with a printed plaque tile. This was built and rendered with Stud.io 2.0.

At 1097 pieces, this model would make for a great display piece and a fun build, for both LEGO and history fans alike.