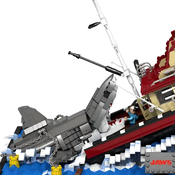 The great white shark (Carcharodon carcharias), also known as the great white, white pointer, white shark, or white death, is a species of large lamniform shark which can be found in the coastal surface waters of all the major oceans.

The great white shark is mainly known for its size, with mature individuals growing up to 6.4 m (21 ft) in length (although reports have been published of great white sharks measuring over 8 m (26 ft),and 3,324 kg (7,328 lb) in weight). This shark reaches its maturity around 15 years of age and was previously believed to have a life span of over 30 years. The true lifespan of great white sharks is far longer; now estimated to be as long as 70 years or more, making it one of the longest lived cartilaginous fish currently known. Male great white sharks take 26 years to reach sexual maturity, while the females take 33 years to be ready to produce offspring. Great white sharks can accelerate to over 56 km/h (35 mph).