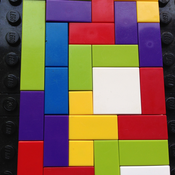 Soon there will be the new Lego minifigures series with the Disney characters. When i saw the Mickey Mouse character, I had to think of the clubhouse.

Mickey, Minnie, Donald, Daisy, Goofy and Pluto interact with the viewer to stimulate problem solving during each episode´s story.

Thank you to everyone for your support and your comments!