This Lego project is about some of the greatest heroes in history, their work has saved the lifes of millions of children and adults worldwide.

Three of them were pionners in the development of vaccines: Edward Jenner, Louis Pasteur and Jonas Salk.  They are represented in three vignettes, each of them illustrates a key moment in the history of the vaccines.

There is also the main diorama, which is about the World Smallpox Eradication Program of the World Health Organization (W.H.O.), that shows a team of professionals of the WHO working in a remote place of Africa. This program was directed by Dr. Donald A. Henderson, and succesfully eradicated the smallpox of the world.

Jenner (1749-1823) was a country doctor, who observed that milkmaids that had been sick of cowpox (a benign and self-limited disease that is contagious from cows) never got sick during epidemics of smallpox (very severe, fatal in 1/3 of the cases). So he proposed and started using the deliberated contagion of a mild illness (cowpox) that induces immunity to another serious disease (smallpox). Jenner also invented a system to propagate cowpox, person to person, so don´t have to rely on sick cows. He shared and published his findings and provided samples of cowpox to all his colleagues to vaccinate as many people as possible. This procedure, called "vaccination", spread worldwide and saved millions of lifes. Although he became a very famous doctor, Jenner vaccinated poor people without charging. 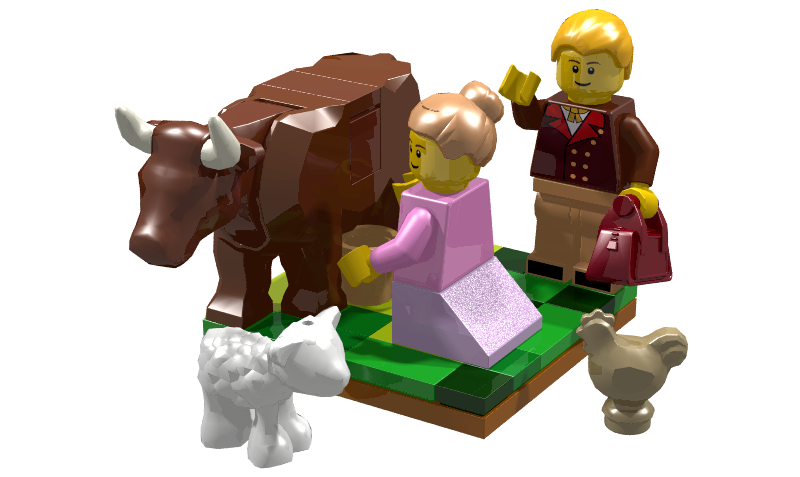 In this vignette Jenner is about to treat a milkmaid who caught cowpox from a cow (42 bricks).

Pasteur (1822-1895) developed in his laboratory an inactivated form of rabies virus (rabies is a deadly disease in almost all cases) that was capable of inducing inmmunity but doesn't produce the disease. Pasteur first tested his vaccine in animals, but chance precipitated its use in humans. A boy named Joseph Meister was bitten by a rabid dog near Pasteur's laboratory. The death of the boy was almost certain. Pasteur used his rabies vaccine and saved the life of the boy. Pasteur not only managed to make a vaccine against rabies, but also showed the way to hundreds of researchers who subsequently developed new vaccines against many diseases. Pasteur did many discoveries about the role of microorganisms in the production of diseases, and  he is considered the father of modern microbiology. 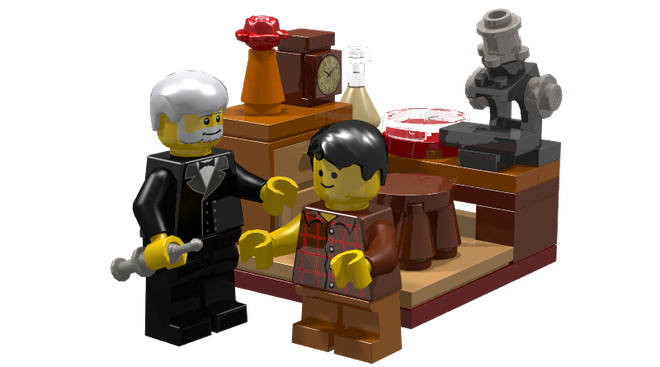 In the vignette, Pasteur is in his laboratory and is going to vaccinate Joseph Meister (52 bricks).

Salk (1914-1995) developed the first vaccine against the polio. Polio is a viral disease that causes a severe paralysis and even the death of the people affected by the disease. In the first half of the XX century, polio was a major problem of public health, for example FD Roosevelt was left paralytic by polio, and only in US in 1952 were reported 58,000 cases, with more than 3,000 deaths, and more than 21,269 were left with paralysis. In 1955, after exhaustive and massive clinical trials in the United States, the success and safety of the Salk vaccine was announced. Salk was hailed worldwide as a hero. When somebody asked him who owned the patent, Salk said, "There is no patent. Could you patent the sun?". 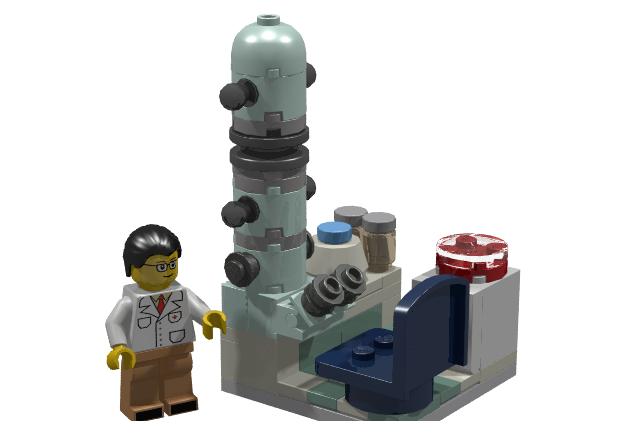 In this vignette, Salk is in his laboratory, with a Transmission Electron Microscope, doing virology research about the polio virus (72 bricks).

Despite the existence of an effective vaccine against smallpox, in the XX century there were at least 300 millions deaths from this disease, especially in underdeveloped countries. In 1966, the World Health Organization (WHO) launched an international vaccination program for the erradication of the smallpox worldwide. Teams of health personnel reached the most remote places in the world to vaccinate people. This was an unprecedented effort, with the cooperation of all countries, regardless of their political or religious tendencies. The leader of this program was Dr. Donald A. Henderson. In 1977 the last natural case of smallpox was registered, and in 1980 the WHO declared smallpox officially eradicated. Dr Henderson received the Public Welfare Medal, the National Academy of Sciences' highest prize, among many other awards. 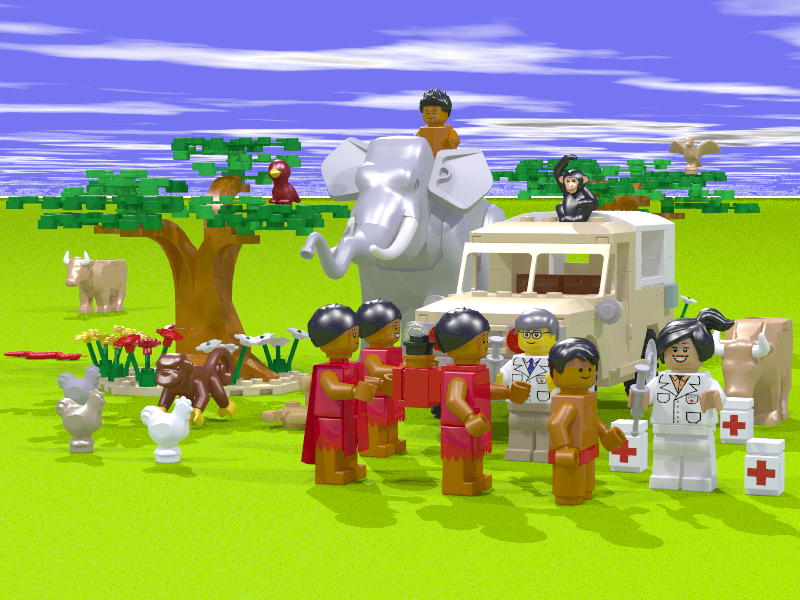 The last and main diorama is a tribute to the WHO's Smallpox Eradication Program. It shows a team of two health professionals vaccinating people in a remote place of Africa (371 bricks). 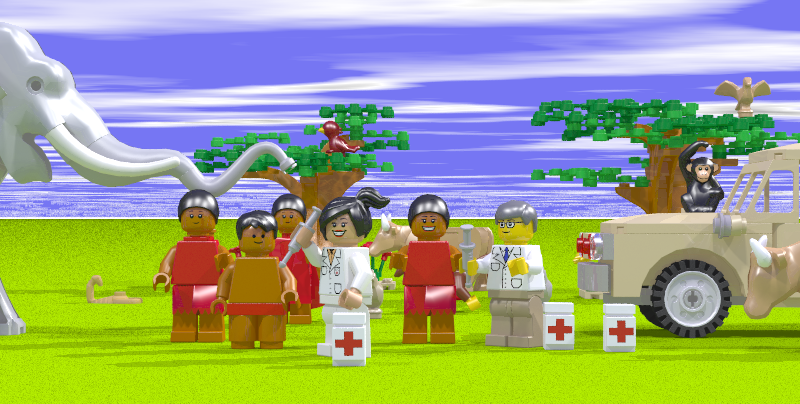 The Vaccines Heroes Lego Project has a total of 537 pieces, including 12 minifigures.

Today there are effective vaccines for many life-threatening contagious diseases, like measles and polio, among others. Scientists are working to find new and better vaccines for other diseases. And health personnel all over the world are implementing vaccination programs to protect people from contagious diseases. They are all heroes fighting against the greatest enemy of mankind throughout its history: infectious diseases. And the people who are vaccinated are also heroes, they not only protect themselves, but they also protect their families and communities.

This project could become an official Lego set if it gathers 10,000 votes. Voting is easy, free and without any obligation, you just have to press the blue button "Support". If you do not have an account on Lego Ideas, you must register, you will receive an email to activate your account and then you can already vote.

If you really like the Lego Vaccine Heroes Project, please share it on your blog, website, facebook and twitter, and invite your friends to check it out and vote. The link is
https://ideas.lego.com/projects/98884
Social networks are very effective in promoting a project and every vote is needed.