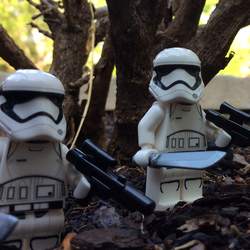 The LEGO Space theme is one of the most popular ever, and Space Police is a beloved subtheme. I decided to build some Space Police models with some LEGO parts from a model I’d just disassembled. This was the result.

Described like a real set: The space pirates have stolen the Space Police Patroller! Build the Attack Dropship and use the stud shooters and detachable Space speeder module to chase down the criminals! Includes 7 minifigures: 2 Space Police commandos, a Space Police gunner, a Space Police astronaut, and three pirates.

This set proposal includes two models: the Police Patroller and the much larger Attack Dropship. I estimate the overall parts count to be around 425 - 450, so the RRP would be around 40-50 USD. The proposal includes seven minifigures, but an actual set would include five or six, and the astronaut or a Pirate would be replaced with a standard Space Police officer. The  Police Patroller is a small ground vehicle which features a unique design with a partially enclosed cockpit and a rear computer terminal. The Patroller also features two flick missiles for playability. The Dropship has a two person cockpit, upper turret, troop bay, and spacecraft hangar to place minifigures in. The design is reminiscent of the Exploriens or Insectoids ships, but other aspects of the model ring of Classic Space and SPIII sets, particularly the curved cockpit. I chose white, red, and grey as the color scheme because I thought it would have a good contrast effect, and because it doesn’t look like any other theme. The troop bay can be accessed by removing the whole gun turret. It can also be used as a cargo bay, and fits up to four figures if you really squeeze them in there. The rear panel lifts to access the hangar, which features a removable space speeder and a control panel for the doors.