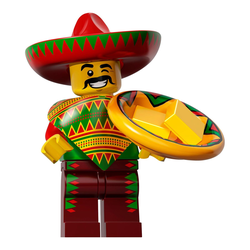 I have built a Yellow Propeller plane with a follow-me car, fuel wagon, and a control tower. My plane is based on a Piper Cub J-3 but with the with the wings under the fuselage rather than above the cockpit. The plane can accelerate to 300 knots and has a take-off speed of 40-80 knots. It has back wheel steering and the propeller can turn. The Follow-me car has a oil-can and a electric screwdriver at the back just in case of any accidents. It can couple up with the fuel wagon which is attached to a fuel drum and has a reader to show how much fuel is being inserted. The fuel nozzle can insert into the nose cone of the aircraft. The control tower has 2 red lights at the top so all aircraft can see it, a rotating adjustable radar array and a radar inside for the Air Traffic Controller to see just what is going on in the airspace. The building is a rest station for all ground and air crew and contains some food, some drinks,and even a TV!
I have built this set as I have a deep interest in aviation and aircraft. I started out building this model as i saw a Lego aircraft in a book and I was playing a flight simulator which has a Piper Cub inside and I thought I could build a Piper Cub but when I enclosed the cockpit and put the wings on the top it looked like a submarine so I thought it would be better to put the wings on the bottom and leave the cockpit open. I built the extras as I thought of things a propeller plane would have with it. They do tend to have a Follow-me car and fuel wagon but definitely a control tower so I built both and I also had a little building ready from something else and thought I should add that as well.
This will make a great Lego set as you can play with it a lot as all the modules are able to fit into someones hand and it is very interactive. It also looks quite realistic with all the red lights and the detailed cockpit. It will also be quite easy to turn into a Lego animation (which I have already done) which is a added extra as well!
TheLegoMaster1478
18