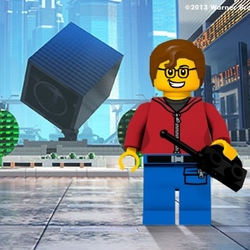 Tank:The first tank model is one of Leonardo's famous inventions. Simple in the structure, it had a form of tortoise and was very heavy. This tank was equipped with cannons all around. The movement was entrusted to eight men inside that moved a gear system connected to the wheels.
Boat with blades: This boat could go faster than the others thanks to the side blades that shifted more water. The difficulty of who moves the blades doesn't increase, but he does the same work which would do with a oar. The difference is that the speed is ten times greater.
Escorpio (boat with sickle): This boat had a roofing system, thanks to which one could row without being hit. It is also equipped with one sickle. Its main function was to cut off the sails of others by preventing enemy boats from moving.

I really hope you like my creation of Leonardo Da Vinci's Inventions (now with a better rendering).