10th Anniversary of Clash of Clans 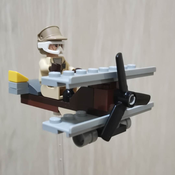 By Hollybricks12
6 comments
I was playing Clash of clans resently. And this year happens to be a Clash of Clans 10th anniversary. So I think it is cool to build a model to commemorate 10th anniversary of Clash of Clans. Then I built this classic level seven base camp.
I put some interior details in the model. Though we don't see anything inside of it in the game. I think it's cool to have some details inside. So I used my imagination to build the interior details based on its look. I hope you will like it.
There are many COC fans and Lego fans. Both of them will appreciate this model. I put a lot of efforts into capturing its shape. And the end result makes a good ornament. All these will make it a good LEGO set.