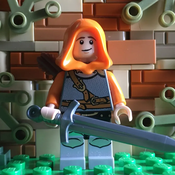 It's time to grab a saddle and mount your steed, because the stableboy wants you to join him for an exciting new adventure!  Only the bravest adventurers will be up to the task...  Do your medieval minifigures have what it takes to dodge the obstacles on the dangerous path ahead?

What is my project?

As far as I know, Lego has never made an obstacle course game before.  So, I thought that this would make a good idea for a Lego set!  It is a fast paced single player game with a cool medieval atmosphere full of nature.  You must dodge the obstacles as they move past you, giving the feel that your horse is galloping along the path.

Here are some functions I included in this build:

The game includes three characters:  The adventurous stableboy, the brave princess, and a mysterious caped rider.  There are many secrets for them to discover in the surrounding landscape.  Will they find the stable's secret treasure, hidden beneath a removable floor panel?  Why is there a dagger hidden amongst the ruins?  Is the caped rider a friend or foe?

I think this model will provide hours of lasting fun.  After you build and play the game, it remains new and exciting because you can rearrange obstacles or build new ones, so the course is different every time!  It's also fun to see how many laps you can go (starting from the start line, marked by the two gold flags) without knocking off any obstacles.  Challenge a friend to beat your best score, or try beating it yourself!

I appreciate any and all support!  Thank you!