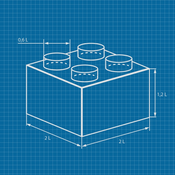 Everyone knows the famous pizza/taco truck. But for a few years, a new generation of food trucks has come to our cities and they are more and more part of our daily life. There have been already food trucks in the Lego collection and on Lego Ideas but in spite of that I have decided to create my own version.

It is composed of 472 bricks and most of them are colored in 140-Earth-Blue. To increase the inside space of the truck to its maximum, it is created with 5 ''knobs'' instead of a production model of Lego. Inside the truck, we find the kitchen which is equipped with two heating plates, a few cupboards, a big ventilation system, a coffee maker and ketchup/mustard bottles. There is also the sales area simply composed with a refrigerated display and a cash register. Outside we find the ventilation system and a plug for the gas bottle. There is finally a lot of facultative stuff like food (burger, ice-cream...), tables, beach umbrellas and 4 mini-figurines (a grandmother, a cook, a teenager, a child...). I would like to add a logo (a burger for example) on the truck, but I do not know how to do it.

Some elements of the truck are mobile:

This food truck is my first project on Lego Ideas, I know this one can be upgraded (by optimizing the bricks organization or by changing colors for example) but I am not experienced enough. I modeled this food truck on LDD because I was not able to build it with real Lego bricks (not enough bricks or some were missing).