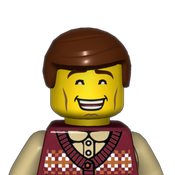 By shimmydave
41 comments
There are soo many great vehicles in Ninjago and one of my favourite episodes is Ninjaball Run. It has a great mix of heroes, villains, and Vehicles. 3 important things to Ninjago. Quite a few of the vehicles and characters in that episode (and through the early seasons) we have not seen as purchasable Lego sets which for me is a real shame.
My Lego Idea is to bring some of these much loved fan favourite vehicles and characters to life in a set or sets. Please see my designs to represent:
The Postman's Bike (40 parts and 1 minifg)
Taking a normal lego bicycle and adding rocket power engines to the side and basket to the front. This is a little build but uses a few parts to get the engines all attached to the single stud on the back of the bicycle. Plus the Postman of course.
Darkley's Boarding School Bus (250 parts and 4 minifigs)
The Darkley's school bus is a supped up 4 wheel drive monster truck styled school bus, the multi coloured nature of the original bus in the series is replicated with blending of coloured plates down the sides and on the roof. The bus is built 6 studs wide (not taking into account the added width with the large off road wheels) it also includes heavy bull bars to the front to aid in the destruction derby element of the race. This bus could come with a number of School pupils. I have it with 4.
Captain Sotos Van (165 parts and 3 minifigs)
A small neat little 6 stud wide van that is a tight squeeze for burley pirates. This more conventional vehicle includes the addition of internal benches and a Crow's Nest on the top with cannons to shoot at the other racers. Includes Captain Soto and 2 pirates.
The Royal Blacksmiths Truck (183 parts and 5 minifigs)
A modified 1950's inspired low riding flat bed truck. This truck is 6 studs wide at the front but the flat bed at the back is 8 studs wide to include supports for the Blacksmiths to perform on the back and also includes a huge gramophone to play out their tunes. It includes side skirt billboards tiles and comes with the 4 Royal Blacksmiths and an extra driver.
Ed and Edna in their Jalopy (249 parts and 2 minifigs)
The jewel of the set for me is the Jalopy. Jay's parents uniquely styled scrapyard built vehicle is unique and iconic in the early seasons of Ninjago. This build incorporates alot of the styling from the series into a 6-8 stud wide build, including the fly wings, the huge rear engine and also the defensive balloons which protect the Jalopy from side collisions and also pop off to get in the way of the other racers. This car obviously comes with Ed and Edna.