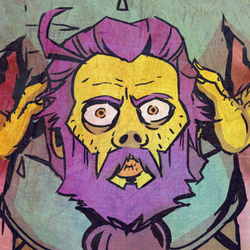 First we have the ship itself, the 'Dandelion'. I wanted to build something that had purpose but style!

It consists of 3 modules: the cockpit, the cargo hold and the weapons/arm module. The cargo hold has two access points, one on the front and one on the roof that slides out. Both allow easy access for loading/unloading. The weapons/arm module features twin blaster cannons on the front and an unfolding arm on the top, this feature was inspired by the. Each module features its own retractable landing gear

As part of this scene I included a number of support vehicles/equipment.

Two of these vehicles are autonomous carts which assist the mechanics that work on the ship: one for cargo and the other for gaining access to the roof of the ship for maintenance.

The other support vehicle is a hexapedal 'Crab Loader' which uses its side mounted robotic arm to transport heavy loads around. It's articulated in a number of ways making it perfect for play and this plus the articulation in the legs allows for some dynamic posing.

I made another ideas submission that is this build on it's own for supporters that may be more interested in this one aspect however I like the idea of it being a part of this larger diorama!

You can find that submission here:

As for the figures I've included 6 them: 1 pilot, 1 crab loader operator and 4 mechanics/engineers. This allows for figures to be placed around the ship and interact with it in different ways bringing the scene to life! also included would be an assortment of tools and cargo elements.

One last little detail is the robotic helper ostrich and the mechanic's cat who seem to be intrigued by each other.

That covers everything. I hope you've enjoyed taking a look at my creation and really hope you decide to support it!

If you'd like to see more of my work you can check out my flickr page here:

Thanks and have a nice day!