The Secret of Monkey Island 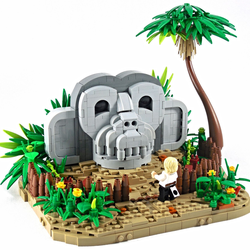 It's been suggested to me by several friends to upload this to Ideas so here goes nothing. I'd definitely love to see an official set based on the Monkey Island saga.

So what could be better than one of the most famous scenes in the history of adventure gaming, the giant monkey head.

This one is not meant to be a playset, but rather a sculpture type of set. Initially I thought I should modify it before adding it here, to add some function to it but I didn't want to sacrifice the aesthetics for some gimmick.

Any suggestions on what I should change/add are more than welcome.

So if you'd like to give this project a chance support it and spread the word. :)