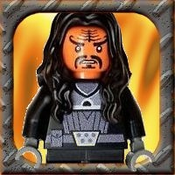 Jenga is a game of skill where players must remove blocks and place them on top of structure that gets less stable with each move. The classic version is simple, each player moves one block on each turn. The "Throw & Go" variation introduces 3 colors and a die to complicate the game. The die will limit the player as to the color or location of the piece they must move- it can also force them to move 2 pieces or reverse the direction of play. Stickers will be needed for the die should the Throw and Go version be made.

Presented also are two build options. One keeps the height of each piece closer to that of a traditional Jenga block- each Jenga block would be made of several thin lego bricks- one 2x6 thin plate, three 2x2 thin plates, and two 1x6 flat plates on top.

An alternate build option would result in Jenga blocks higher than usual but a Jenga logo would be able to be printed on the side of the blocks. In this configuration one standard height 2x6 lego brick is used and two 1x6 flat plates smooth out the top. Although it does not look as close as the original, actual game play is closer to the original as there is less a chance for any high friction points along the sides of the blocks.