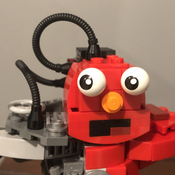 Brawl Stars is an immensely popular 3v3 MOBA from the creators of Clash of Clans and Clash Royale. Supercell has done their best with this fun and exciting shooter game with no blood, cool powerups, and different playing formats/challenges. It has a multitude of characters (brawlers) that are each unique and powerful in their own way. My friend FeepoGerbin (another LEGO ideas member) and I decided to replicate some of the robot brawlers through LEGO form.

FeepoGerbin built the brawlers Darryl and Tick. Darryl is a heavyweight brawler with a double shotgun attack, capable of destroying enemies in seconds if they get too close. Identified by his brown-silver armor and large pirate hat, Darryl is an extraordinarily strong brawler. Tick is the complete opposite, a thrower brawler with a low health bar and a mine-throwing attack. Tick's tiny silver body and detached head mark him as one of the most high-skill brawlers in the game.

My LEGO brawlers include Barley and 8-Bit. Barley is a thrower brawler who chucks poisonous bottles that leave a temporary damaging AOE when they hit. Dressed like a bartender with a top hat and a white cloth, Barley is one of the oldest brawlers in the game. 8-Bit is a sharpshooter brawler who shoots powerfully damaging laser beams with his sci-fi blaster. Easily identified by his arcade-like body and thick blue arms, 8-Bit is one of the newest brawlers in the game, but one of the most powerful.

These robot brawlers would make an incredible LEGO set because they almost perfectly imitate the brawlers in the game. No corners were cut on these builds; if the right piece couldn't be found we would redesign the entire part. Each brawler has a large range of motion; the leg and arm joints are all movable and usable. These LEGO brawlers are accurate representations of the virtual ones and just as fun to play with. Please give an upvote and brawl on!

(Note: The LEGO brawl stars logo and white supports are not part of the LEGO set. The set consists of the 4 brawlers alone.)